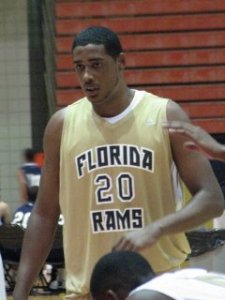 Seven years removed from Jim Boeheim’s run to a national championship, the Syracuse Orangemen have signed another player named “Melo,” this one from Brazil. Fab Melo is a seven foot center from Brazil who moved to Florida several years ago. Rated by Rivals as the #2 center in the class of 2010, Melo should add to an already stacked class where the Orange have signed four star small forward C.J. Fair and shooting guard Dion Waiters.

Fab Melo isn’t his real name as the Brazilian was born Fabricio de Melo. With a large wingspan and athletic ability, the Orangemen should vie for another title in 2010, this time with another freshman named “Melo” in the Carrier Dome where Big East dominance has been common. Coming off a season where the Orange went 28-10, losing to Oklahoma in the Sweet Sixteen, Boehiem is another coach with a stacked class for 2010, that includes PF Jared Sullinger and Harrison Barnes. This class is one of the best in years and has been compared to the class of 2006 which featured OJ Mayo, Derrick Rose, and Kevin Love. With Melo back in Syracuse, the hoops game looks to be back on top.