Taylor Mays:Far and Beyond The Top Player in College Football 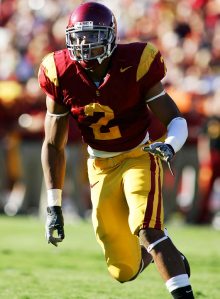 Running a 4.3 40 yard dash at 6’3″ 235 lbs is amazing, knocking out the incoming receiver and your own cornerback is amazing, for Pete Carroll his strong safety Taylor Mays is amazing. Forgoing the NFL Draft, Mays decided to come back to Los Angeles and try to win a national championship, something that USC is always expected to do each season. This year, the hopes for the Trojans are that much higher even with the departure of QB Mark Sanchez, LB’s Clay Matthews, Brian Cushing, and Rey Mauluga, the Trojans still are the most talented team in college football. Mays, at his usual spot in coverage, will control the skies for opposing teams and lay hits whenever necessary. Coming back for his senior season, the Seattle native looks to improve on the 53 tackles he made as a junior in a season where Mays was an All-American on everyone’s list and was a finalist for the Thorpe Award. With his size and speed, Mays is an NFL coach’s dream for a strong saftety, showing Ed Reed’s versatility, Jack Tatum’s power when delivering the blow and the playmaking ability of Brian Dawkins. Never in the history of college football have we seen a player of his size and skill.

Coming into his freshman year in 2006, most people were star struck when they saw #2 run onto the field, and for most Trojan fans this was another player in the line of stars USC has produced in the past few seasons. From Carson Palmer to Reggie Bush, Pete Carroll has installed an NFL factory on campus, and Mays looks to be the best yet. With SEC fans claiming Eric Berry is the best safety in the country, they obviously haven’t come out west. Not only did Mays shut down the Ohio State offense, Mays showed every Pac-10 oppo

nent that if they threw the ball his way, their receiver would pay the price. In the Rose Bowl, Mays laid a hit on Penn State WR Jordan Norwood that not only knocked out Norwood, the blow landed in the chest of CB Kevin Thomas, which knocked out the fellow Trojan. In a class of college football stars including Florida QB Tim Tebow, Texas QB Colt McCoy and Cal RB Jahvid Best, Taylor Mays is far beyond the best player in college football.

With the Trojans playing at Ohio State, Mays looks to control the passing game of Terrelle Pryor and the Buckeyes and help lead USC to a national championship berth, something they haven’t experienced since Vince Young and Texas beat the Trojans in Mays’ senior year of high school. For USC, Rose Bowl berths are not enough and Mays wants to take USC to the title game which will be in Pasadena this season. Under scrutiny for NCAA violations, USC coach Pete Carroll looks poised to take his team to the BCS Championship Game and pay them well also. I heard Mays is making around $500,000 a year, just playing but really, Mays is THE BEST player in college football and will show the nation that by winning the Thorpe Award and helping USC win an eighth consecutive Pac-10 title, if not the national title.